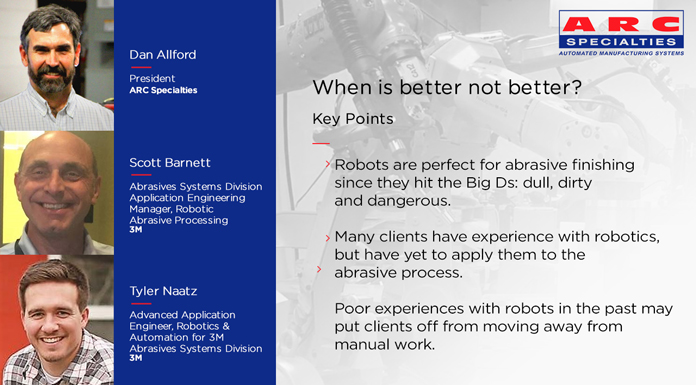 We all can use a little help from our friends – but what if that friend is a robot?

With collaborative robots, robots with safety features that allow more human interaction or for humans to work nearby, that’s possible.

It’s not only safety where collaborative robots shine, however, with programming a task that can be taken on even by those who haven’t programmed robots before.

“In the collaborative space, I think that’s been one of the big selling points. I can pick up a pendant (and) actually grab the robot and kind of move it around and guide it through the path so you don’t have to jog it, save a point, jog it again, save another point,” said Tyler Naatz, Advanced Applications Engineer, Robotics and Automation for 3M’s Abrasives Systems Division. “You can kind of do that through follow-my-path type programming using all those sensors that are in these robots. I think that’s a big reason people are looking at them.”

With that ability to minimize the complexity of programming also comes a few drawbacks. For one, the tool force will be limited, as will the speed at which a collaborative can run. That makes it perfect for projects like orbital sanding, but perhaps not the right fit for some other endeavors.

There are other fantastic applications, as well, like a project ARC Specialties President Dan Allford was working on when he needed to polish conical pressing dies.

“To do that, we’re having to polish all the way around the circumference, around the corner, very complex shapes,” he said. “So, a robot was perfect for the application in that a robot could make all these moves. By using a collaborative robot with that sense of touch and the ability to maintain constant tool force, we’re able to, (even) as the part changed size or particularly as the abrasive changed size.”

“The collaborative robot, with that ability to translate and change trajectory on the fly based upon loads, made it a great application.” 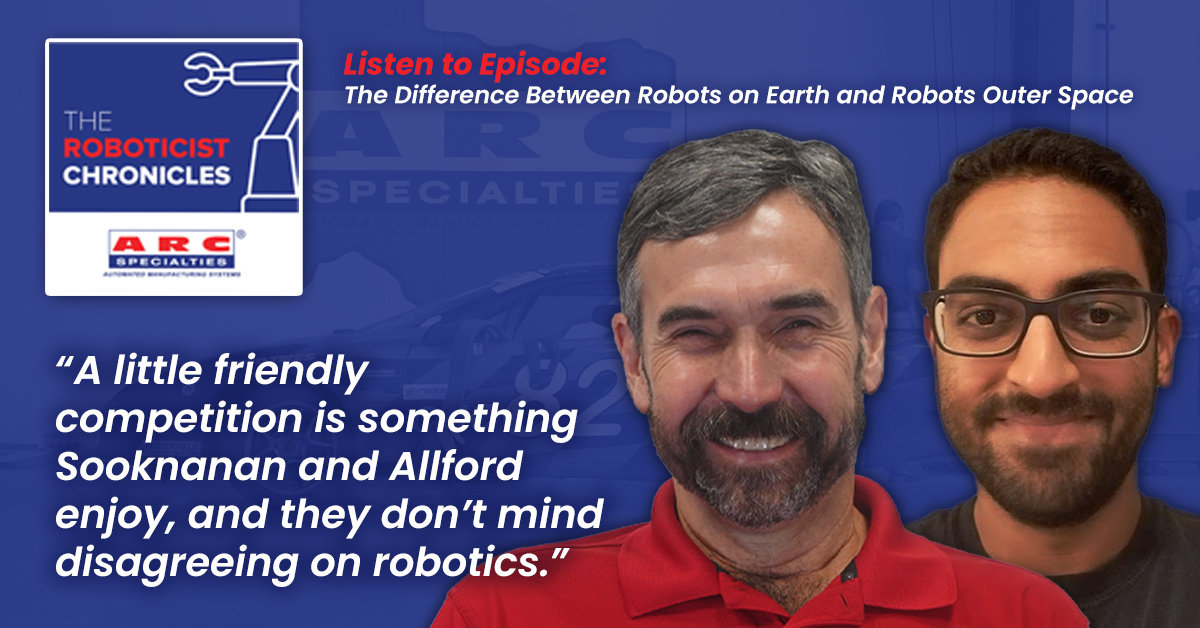 If there’s one thing Dan Allford, president of ARC Specialties, and Josh Sooknanan, an aerospace engineer with NASA, can agree on, it’s a need for speed.

Another interest – and perhaps friendly competition – these two share is high-level robotics. Having so many interests in common allows Sooknanan and Allford to keep each other on their toes, both on the race track and in their work.

Having a level of supervised autonomy is key in the space industry, according to Sooknanan, so that robots can do their jobs safely.

“You know, with some level of oversight, [we can] make sure we’re not going to take one of these massive manipulators on the outside of a space station and poke a hole in it or something crazy like that,” Sooknanan said.

Allford on the other hand is looking for autonomy where the robot will do the same thing over and over, but also wants it to have sensor systems that give it sight and touch sensors that encourage it to adapt. According to Allford, adding sensor systems is a key element of autonomy.

A Bond Built for the Long Haul

A little friendly competition is something Sooknanan and Allford enjoy, and they don’t mind disagreeing on robotics.

“I like to pick on Josh, largely to stimulate conversation, because we’re solving similar problems in very different ways. So, by provoking him, I can get him to talk a little bit more,” Allford said.

Robotics aside, the really big question is clear – who is the better race car driver?

“What I like to remind Josh of is that a good instructor is defined by the fact that their student exceeds their skill,” Allford said.

“I concur,” Sooknanan said with a laugh.

Enjoy the Podcast: The Difference Between Robots on Earth and Robots Outer Space