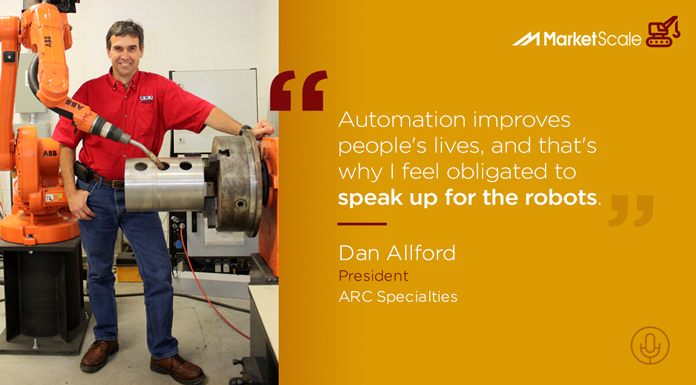 Have you heard of the concept of robot taxation? It’s an idea that pushes for more taxes on companies that use robots over human labor, and supporters have a fierce advocate in their corner: Bill Gates. But does it make sense in the modern world, one in the midst of the fourth industrial revolution and driven by data and automation? Dan Allford, President of ARC Specialties, a provider of welding automation technology, joined us today to give his perspective on robot taxation and why, after his experience in the field, he think it’s a poor idea.

“I can only assume that Gates’ perspective on this is that it would save jobs. But automation has been part of manufacturing and other industries for a long time. Robots are just the newest form,” Allford said. “Think back to when looms replaced weavers. There was a fear of technology, but this innovation is the reason you have a closet full of clothes.”

Allford argued that automation improves people’s lives, and that robots haven’t hurt peoples’ jobs but rather empowered them. “Decades ago, 50% of all people were employed on the farm; now it’s only 2%. The result is we have plentiful, affordable food—not that jobs have been replaced,” he said.

“Look, robots have yet to take any fun jobs; they take the worst jobs. Jobs in dirty environments, hot environments, or even radioactive environments. So, it’s important for me to speak out on behalf of robots and automation,” Allford added.

Allford remembers, years ago, writing a paper on how the personal computer would wipe out typists. In this case, automation has affected the workforce. But he draws the connection between the end of the typist and Gates’ push for this taxation; he’s been one of the main catalysts for innovation in computer automation and automation in general.

“The truth is that placing a tax on a resurging market like manufacturing won’t save jobs. It will actually lead to more offshoring,” Allford said.