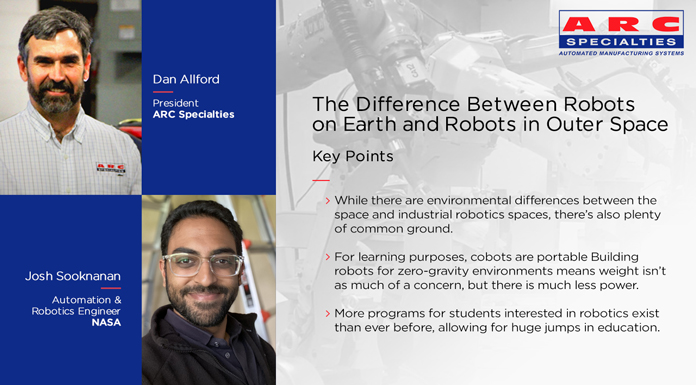 Some things are challenging enough, but an extra element takes the degree of difficulty up several notches. That’s how it is for Josh Sooknanan, an aerospace engineer with NASA, who takes robots and puts them into space.

In addition to the already steep curve of working with robotics, Sooknanan also has to face things like delays in how long a robot takes to respond.

“Robots in general are hard. Anybody that is getting into robotics, the problem you’re getting into is always harder than you’ve scoped it to be,” he said. “That’s when the robot is in front of you on your lab bench. You put the robot 200 miles above your head orbiting the earth or, even more difficult, on the moon or on Mars or a probe doing deep-space research, and the delays are unbelievable.”

Dan Allford, president of Arc Specialties, is a friend of Sooknanan and noted there are different challenges he has to face in the industrial world.

“I think one of the biggest differences between your world and my world is gravity. I’ve got to work with this stuff called gravity and it’s 32 feet per second squared, and it’s pretty constant,” Allford said. “A lot of times when we have to design and build a robot, it’s because the loads exceed that of any available commercial robot, and that’s a gravity problem. You’re up in space and you don’t have to fool with gravity.”

Of course, while Allford has gravity, he also has more sources of power than simply the sun – and less delay between the time it takes to send a command to a robot and see it carried out.

The two friends, who race cars and mountain bikes when not talking shop about high-level robotics, come together on more things than they diverge on, with both eager mentors of high school students interested in robotics.

Both marveled at programs like the BEST Robotics team competition and U.S. First Robotics, which give kids like them who were obsessed both with science-fiction and tinkering with machines a year-round outlet to learn in a more structured environment.